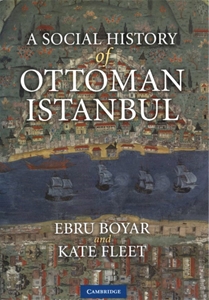 A Social History of Ottoman Istanbul

Using a wealth of contemporary Ottoman sources, this book recreates the social history of Istanbul, a huge, cosmopolitan metropolis and imperial capital of the Ottoman Empire. Seat of the Sultan and an opulent international emporium, Istanbul was also a city of violence shaken regularly by natural disasters and by the turmoil of sultanic politics and violent revolt. Its inhabitants, entertained by imperial festivities and cared for by the great pious foundations which touched every aspect of their lives, also amused themselves in the numerous pleasure gardens and the many public baths of the city. While the book is focused on Istanbul, it presents a broad picture of Ottoman society, how it was structured and how it developed and transformed across four centuries. As such, the book offers an exciting alternative to the more traditional histories of the Ottoman Empire.