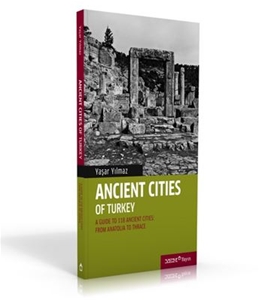 Because Anatolia and Thrace have historically served as land bridges joining Europe and Asia, these areas today enjoy an abundance of ancient and antique city sites. One would be hard-pressed to find any other plce that has such magnificent and unique historical remnants. Dating to 9600 BC, Göbekli Tepe, the world's oldest site yet discovered site, is located in Eastern Anatolia, while the antique cities built in the years of 2000 BC by the Hatti and the Hittites are dotted across Central Anatolia, and the most famous antique cities of the classical period are located along Anatolia's Aegean coasts. While visiting the antique cities, one can easily find traces of all the historical periods of Anatolia, including the Luvian-Pelagas, who are considered to be the forerunners of all the peoples settled on this land, to the Hittities, the Macedonians, the Roman, the Byzantines, and the Seljuks to the Ottomans. This book presents its readers with118 ancient cities, all derived from the inventorybuilt on Yaşar Yılmaz's 3,5 year of visits to, and careful photographingof, each of the sites. The photographs are further enchanced by brief, but satisfying, descriptions of the sites compiled from historical resources. Information is provided on the most significant monuments and ruins that once formed the urban core of each site, including their market places, fountains, theaters, and baths, while historical personages and the unique social, cultural, economic, and political structures of each site are also discussed. The book also provides an up-to-date road map and directions on how to find the sites. The antique city sites have been arranged according to the unique topography of the land and in such a way that they can be visited in relatively short visits. These eight major regions begin with the Marmara region, and then continue on with the Aegean region (Aegean, Inland Aegean, Southwest Aegean), the Mediterranean region (Western Mediterranean, Central Mediterranean, Eastern Mediterranean) and finally the eight region (Central Anatolia and Western Black Sea).