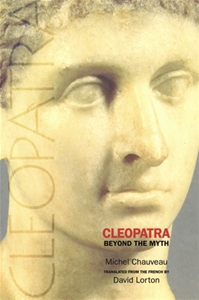 Cleopatra Beyond the Myth

Cleopatra: kohl and vipers, barges and thrones, Elizabeth Taylor and Richard Burton. We have long been schooled in the myth of the Egyptian ruler. In his new book Michel Chauveau brings us a picture of her firmly based in reality. Cleopatra VII reigned in Egypt between 51 and 30 B.C.E. Her primary goal as a ruler was to restore over the eastern Mediterranean the supremacy of the Lagides, the dynasty of Macedonian origin of which she herself was a descendant. We know the queen best from Greek and Latin sources, though these must be used with caution because of their bias. Understandably enough, they reflect not only matters of interest to Romans, but also the propaganda that Octavian used against the queen during his struggles with Mark Antony. Chauveau combines his knowledge of Egyptian sources with judicious use of classical materials to produce an authoritative biography of Cleopatra, the woman and queen, seen in the light of the turbulent era in which she lived.