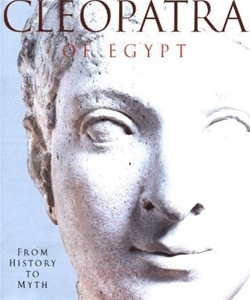 Cleopatra of Egypt: From History to Myth

Fabled for her sexual allure and cunning intelligence, Cleopatra VII of Egypt has fascinated generations of admirers and detractors since her tumultuous life ended in suicide in 30 B.C. The last of the Ptolemaic monarchs who had ruled Egypt for three centuries, Cleopatra created her own mythology. She became an icon in her own lifetime and a legend after her death.

This lavishly illustrated catalogue coincides with a major international exhibition celebrating images of Cleopatra. It explores how she was depicted during her own era, in works ranging from coins to life-size sculpture. Exciting new discoveries are featured--including seven Egyptian-style statues believed to represent Cleopatra, and two portraits probably commissioned while she was living in Rome with Julius Caesar. The book also examines interpretations of Cleopatra from the Renaissance to modern times, as seen in paintings, ceramics, jewelry, plays, operas, and film. In addition, recent archaeological finds from Alexandria (Cleopatra's capital) and from Rome illustrate aspects of life in Cleopatra's day.