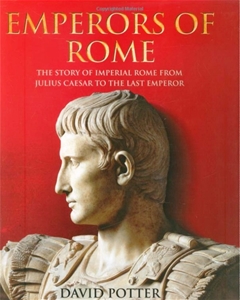 In 27 BC, after the tumultuous period of civil war triggered by the assassination of Julius Caesar 17 years earlier, Octavian was proclaimed emperor by the Roman Senate and given the title 'Augustus'. He ruled over an empire that embraced the territories of 25 modern nation-states and had more than 50 million subjects. Its provinces stretched from Hadrian's Wall in the North to Egypt in the South, and from Portugal in the West to Syria in the East.
Emperors of Rome charts the triumphs, vicissitudes and ultimate decline of the Roman empire over the 500 years that followed the accession of Augustus, an era during which Rome reached heights of economic prosperity and cultural achievement, but also plumbed depths of anarchy, cruelty and chaos. As well as bringing key events vividly to life, from the defeat in Teutoburg Forest in AD 9 to the destruction of Pompeii in AD 79 , and from the vision of Constantine of the early 4th century to the sack of Rome by the Visigoths in 410, the distinguished historian David Potter examines critical themes at the heart of the Roman polity - the nature of imperial government, the relationship between virtus (duty to the state) and domus (domestic life), and the spread of Roman culture through the cities of the empire.
David Potter's enthralling and multi-faceted narrative is punctuated by memorable profiles of the greatest and most notorious of the Caesars - the autocratic Augustus, the feeble Claudius, the brutal Domitian, the philosopher-emperor Marcus Aurelius, the deranged Commodus, and the reforming Diocletian, to name but a handful.
Richly illustrated in full colour, and amplified by a generous complement of editorial features including factboxes, timelines and quotations, Emperors of Rome is the ideal introduction to imperial Roman history for the non-specialist.