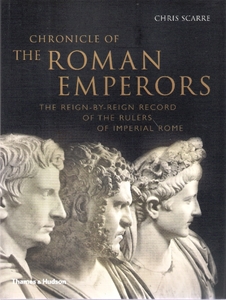 Chronicle of the Roman Emperors

This is a highly readable history and a unique work of reference. Focusing on the succession of the rulers of imperial Rome, it uses timelines with at-a-glance visual guides to each reign and its main events. Biographical portraits of the 56 principal emperors from Augustus to Constantine, together with a concluding section on the later emperors, build into a highly readable single-volume history of imperial Rome. Biographical information is illustrated with busts of each emperor, coin portraits, battle plans and cutaway diagrams of imperial monuments. Supporting datafiles for every emperor list key information such as name at birth, wives and children, full imperial titles and place and manner of death. Genealogical trees and over 90 sidebars and special features on subjects ranging from Nero’s Golden House to Diocletian’s Palace allow the reader to delve even deeper. Colourful contemporary judgments by such writers as Suetonius and Tacitus are balanced by judicious character assessments made in the light of modern research. The famous and the infamous – Caligula and Claudius, Trajan and Caracalla – receive their due, while lesser names emerge clearly from the shadows for the first time. Chronicle of the Roman Emperors is at once a book to be enjoyed as popular history, an essential work of reference, and a source of visual inspiration, bringing to life one of the most powerful and influential empires the world has ever known. ‘A valuable volume providing a nice blend of information and entertainment’ – Teaching History ‘Marvellous’ – New Scientist