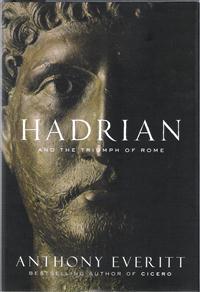 Hadrian And The Triumph Of Rome

Born in A.D. 76, Hadrian lived through and ruled during a tempestuous era, a time when the Colosseum was opened to the public and Pompeii was buried under a mountain of lava and ash. Acclaimed author Anthony Everitt vividly recounts Hadrian’s thrilling life, in which the emperor brings a century of disorder and costly warfare to a peaceful conclusion while demonstrating how a monarchy can be compatible with good governance.

What distinguished Hadrian’s rule, according to Everitt, were two insights that inevitably ensured the empire’s long and prosperous future: He ended Rome’s territorial expansion, which had become strategically and economically untenable, by fortifying her boundaries (the many famed Walls of Hadrian), and he effectively “Hellenized” Rome by anointing Athens the empire’s cultural center, thereby making Greek learning and art vastly more prominent in Roman life.

By making splendid use of recently discovered archaeological materials and his own exhaustive research, Everitt sheds new light on one of the most important figures of the ancient world.