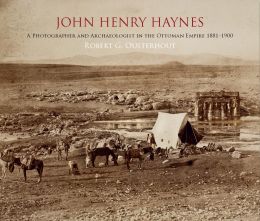 John Henry Haynes: A Photographer and Archaeologist in the Ottoman Empire

Virtually unknown today, John Henry Haynes (1849-1910) may be regarded as the father of American archaeological photography. In a landmark study, with many photographs published for the first time, Robert Ousterhout rediscovers Hayne's career, assessing his unique blend of artistry and documentation. His photographic odyssey took Haynes across the Ottoman Empire, from Athens to Constantinople, across Anatolia, and ultimately to Mesopotamia. Although he had scant academic credentials and just a short training in 'aesthetic' photography, Haynes broke new ground. In 1900 he uncovered an astounding cache of 23,000 cuneiform tablets that are the foundation of much of what we know about the Sumerian literary tradition. And with his discerning eye and artistic sensibility, he captured astonishing sights, many never photographed before, and many no longer in existence. The victim of rivalry, snobbery and outright skulduggery, he died 'broken in body and spirit'. Professor Ousterhout tells the story of Haynes the unsung hero and assesses his unique contribution with insight and addestion.