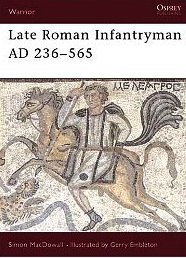 Between the 3rd and 6th centuries AD the traditional legions of heavy infantry were whittled away and eventually replaced by a force of various arms and nationalities dominated by cavalry and supported by missile troops. However, in spite of this trend towards cavalry, the pedes remained the backbone of the Roman army until well into the 5th century. This book details a warrior who was very different from the legionary who preceded him; perhaps he was not as well disciplined, but in many ways he was more flexible – ready for deployment to trouble spots, and for fighting both as a skirmisher and a heavy infantryman.