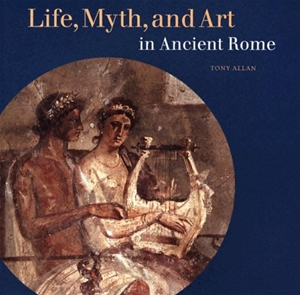 Inspired by the achievements of the ancient Greeks, the Romans made their city the center of an empire unsurpassed in size and influence for more than a thousand years. Its rich legacy shaped the medieval world and continues to amaze us today.
Life, Myth, and Art in Ancient Rome celebrates the many achievements of Roman culture and delves into its fascinating dark side. Romans erected structures so well-built and engineered that they still stand millennia later, yet these same buildings also showcased blood sports as public entertainment. The Romans instituted just government, impartial legal and political institutions, and concepts of citizenship, yet its population included slaves as well as patricians and plebeians, and was often riven by intrigue, superstition, and savagery.
This volume is a richly illustrated introduction to a fascinating, at times paradoxical, civilization and its art and architecture, ranging from magnificent temples and aqueducts, to exquisite mosaics and jewelry. Placing the art in its cultural context, the author covers themes that have long inspired the Western imagination, including the rise and fall of emperors, the life and death of the gladiator, the belief in omens and prophecy, and, ultimately, the establishment of Christianity.