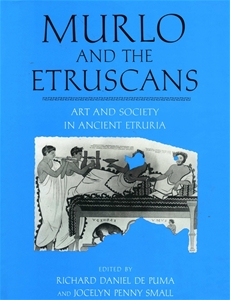 Murlo and the Etruscans: Art and Society in Ancient Etruria

Murlo and the EtruscansÂ explores this and other mysteries in a collection of twenty essays by leading specialists of Etruscan and classical art, all of whom have been associated with the Murlo site. Numerous photographs and drawings accompany the essays. The first eleven chapters survey specific groups of Etruscan objects and challenge the view of Etruscan art as provincial or derivative.Â  Interpretations of the magnificent series of decorated terra cotta frieze plaques and other architectural elements contribute to an understanding of Murlo and related Etruscan centers.Â  Plaques depicting a lively Etruscan banquet offer a way to detect differences between Etruscan and ancient Greek society.Â  The remaining nine chapters treat various aspects of Etruscan art, often moving beyond ancient Murlo, both geographically and temporally.Â  They examine funerary symbolism, sculpted amber, and amber trade contacts along the ancient Adriatic Coast; depictions of domesticated cats; votive terra cottas of human anatomical parts and how they help in understanding Etruscan medicine; and the adaptation of Greek style, myth, and iconography in Etruscan art.Â  “These essays will have a broad impact on the study of the ancient Mediterranean.Â  They will certainly be required reading not only for Etruscologists but for anyone with an interest in the world of classical antiquity.Â  The range of subjects, moving in wide arcs around the archaeological site at Murlo, brings the site into focus in a way that a series of standard archaeological site reports could not.”—Kenneth Hamma, J. Paul Getty Museum “There is a fine and commendable interweaving and intertwining of thoughts and scholarly research throughoutÂ Murlo and the Etruscans. It will be a useful reference source for the art of Etruscan coroplast, wherein lies the forte of the Etruscan sculptor!”—Mario A. Del Chiaro, University of California