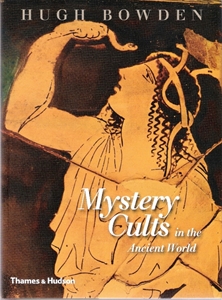 Mystery Cults in the Ancient World

This is the first book to describe and explain all the major mystery cults of the ancient world, reconstructing the rituals and exploring their origins. Making use of the most recent investigations, the book is also informed by current work on the anthropology and cognitive science of religion.

These cults were an important part of life in the ancient Mediterranean world, but their practices were shrouded in secrecy, and much has remained unclear until now. What participants did, and what they actually experienced, should be central to our understanding.

Mystery Cults in the Ancient Worldmakes plentiful use of artistic and archaeological evidence as well as ancient literature and epigraphy. Greek pottery, Roman frescoes, inscribed gold tablets from Greek and South Italian tombs and the excavated sites of ancient religious sanctuaries all contribute to our understanding.Richly illustrated and clearly written, this is a significant contribution to the study of these cults, but is also accessible to a general readership. More than any other book on ancient religion, it allows the reader to understand what it was like to participate in these life-transforming religious events.