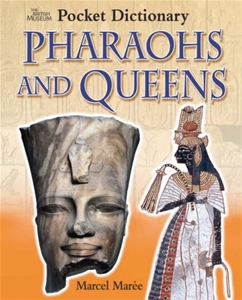 A new title in the popular Pocket Dictionary series. A handy illustrated dictionary which will introduce the reader to the pharaohs - the great god-kings of ancient Egypt. It was these kings who built the pyramids, and other amazing monuments such as the temples and palaces of Thebes. It was some five thousand years ago that the first king united the whole of Egypt under one ruler. With short breaks, the rule of the pharaohs lasted for almost three thousand years, until the conquest of Egypt by Alexander the Great. It was rare for women to rule ancient Egypt in their own right, but there are notable exceptions, such as Hatshepsut, who took control of the country from her nephew and had herself shown on monuments with the regalia and physical body of a male king. Other queens were famed for their beauty and glamour, such as Nefertiti, and Rameses II's chief wife Nefertari, the inspiration for the wonderful temple at Abu Simbel, and the owner of one of the most beautiful tombs in the Valley of the Queens.