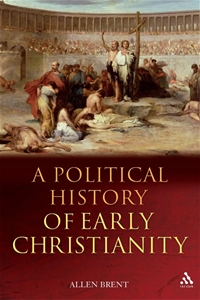 Brent focuses on the reformation of republican religion and the exercise of political authority in Augustan society. Augustus' revolution involved a reformation also of republican religion that provided legitimation for the exercise of political authority. The iconography of the Ara Pacis, for example, shows that Augustus as augur was making a metaphysical claim, namely to have secured the peace of the gods not simply throughout the civil organization of the empire but also in nature itself. What republican religion had failed to do, his reformed religion had succeeded in doing. Thus Augustan society had reached a formally similar position to the world of the late twentieth century with its own version of the 'end of history' (Fukuama) in which not simply all other practical political alternatives seem to have been excluded but ideological (or metaphysical) ones as well. How was Christianity, if it were to achieve transformation of contemporary society, to respond to such an apparently unassailable position? How indeed was it to develop both the aim and the strategy for so doing? It needed to shed its original apocalyptic solution in which the certainty of the imminence of the second advent meant that there was no need for actions with political implications in this world. Such a process bears comparison with the way in which Marxists active in Western democracies refused involvement in normal political processes whilst they awaited the 'inevitable' collapse of 'capitalism.' It needed to turn from a perspective of inner soul-culture that had no interest in the transformation of wider society (Gnosticism). Such is paralleled by a kind of charismatic fundamentalism in the present. It needed to produce a 'project' that would be effective in transforming its values into a form that bore convincing parallels to the values of the dominant culture that its was endeavoring to influence in order to secure wide support for its access to power.