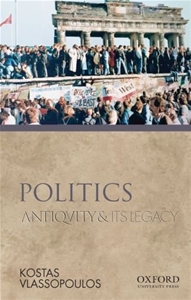 Politics: Antiquity and Its Legacy

Ancient Greece is famous as the civilization that "gave" the world democracy. Democracy has in modern times become the rallying cry of liberation from supposed totalitarianism and dictatorship. It is embedded in the assumptions of Western powers proclaiming their faith in the global spread of democratic governance and at the same time wielded by protesters in the developing world who challenge what they view as the West's cultural imperialism. In Kostas Vlassopoulos's lively and well informed study of politics in antiquity and political discourse in the modern era, he posits that much can be learned about the practice of politics from a comparative discussion of the classical and the contemporary. His starting point is that the value of looking back to a political system with different assumptions and elements can help us think, and even shape, what the future of modern politics might be. He discusses the contrasting political systems of Athens, Sparta and Rome; the political theories of thinkers like Plato, Aristotle and Cicero; how great events like the Peloponnesian War or the Roman civil wars shaped the course of political theory; and the discovery of freedom, participation and equality as political values in antiquity.