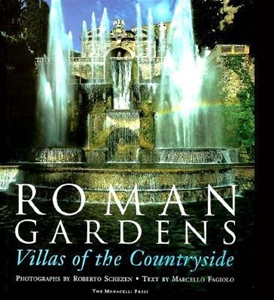 Roman Gardens: Villas of the Countryside

The wealthy and cultured cardinals and princes of the sixteenth and seventeenth centuries built rural retreats with elaborate gardens that came to define thegiardino all'italiana. In many cases they built directly on the ruins of the villas of ancient emperors. This area ofvillae tuscolanae, featured in the writings of Cicero and others, remains legendary today. The engaging text traces the history of the Roman garden -- its character drawn from the rich cultural mix of Mediterranean, Latin, and Etruscan heritages -- and the inseparable relationship of Renaissance and baroque villas and gardens to those of antiquity.

Illustrated with 240 lush color photographs, this volume celebrates twelve gardens in the Roman countryside (many closed to the public and shown here for the first time), including the archetypal Hadrian's Villa, Villa d'Este at Tivoli and its famous waterworks, the spectacular Palazzo Farnese at Caprarola, and the legendary "villa of the monsters" of Vicino Orsini at Bomarzo. The gardens encompass the entire villa's grounds and include architectural treasures, hanging gardens, elaborate fountains and water games, statues, paintings, and frescoes. These remarkable sites portray the 'culture of the garden' -- the idea of architecture and garden conceived as one total work of art.