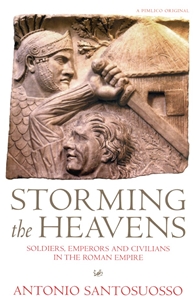 As fans of Ridley Scott's film Gladiator know, ancient Rome could be a violent, treacherous place, one in which might made right. In this well-crafted historical study, Antonio Santosuosso shows that the structure of the Roman military itself was a cause of strife and disorder.

In the early Roman republic, military service was deemed a privilege reserved for members of the propertied elite, whose interests were considered to be close to those of the state. As Rome's empire grew, and with it the forces needed to control Rome's holdings, its armies increasingly had to rely on a different kind of soldier, drawn from the many conquered peoples the empire embraced and from the rural, landless poor, whose loyalties to faraway Rome were less constant and who saw military service as one of the few means to advance themselves in a class-bound society. As historian Antonio Santosuosso shows, armies at the edges of the empire instead gave their allegiance to their commanders, who harbored imperial ambitions of their own--and who, from time to time, turned their armies around and marched on the capital to claim the throne for themselves. Naturally enough, this made Roman politics an unstable affair, and in fact throughout the third century A.D. an emperor was likely to have come to power through a coup d'état, and to end his days as the victim of assassination.

Students of military history and Roman history alike will find much of value in Santosuosso's survey. --Gregory McNamee