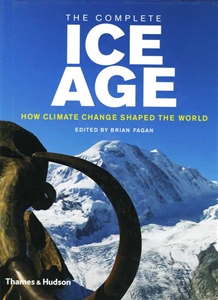 The Complete Ice Age - How Climate Change Shaped the World

The astonishing climatic rollercoaster that was the Ice Age formed the backdrop to human evolution for almost 2.5 million years. During this time vast swathes of North America and Europe were frequently covered by ice sheets up to 2 kilometres thick, glaciers carved great valleys through the landscape and fearsome beasts including the sabre-toothed cat and woolly mammoth roamed a freezing, desolate wilderness.
What caused this period of intense cold and the intervals of rapid warming that punctuated it? And how did human populations survive in such an unstable and hostile world?
As global warming and rising sea levels threaten the very foundations of our society, the need to understand past climate and the ways in which humans and animals adapted to it have never been more imperative.
In this book, leading scientists weave a compelling story out of the most up-to-date discoveries in different fields of Ice Age research.
As the glaciers melted 10,000 years ago, our ancestors faced a staggering sea-level rise of 120 metres, far in excess of the relatively modest rise predicted for the 21st century. The final chapter issues a stark warning about the future of our planet and the consequences of our profligate lifestyles.
Magnificently illustrated with dramatic landscape photography, fossil remains of our ancestors and Ice Age beasts, and specially commissioned explanatory diagrams, The Complete Ice Age shows both the fragility of our climate system and the power of humans to adapt to the most extreme environmental challenges.