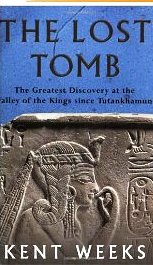 Tomb 5 - the tomb surrounding that of Tutankhamen - had been looted, explored and discounted decades ago. So convinced were the authorities that nothing more was to be found in this area that plans were going ahead to build a carpark. In one final exploration of what had become a dumping ground for previous excavator's debris, Dr Kent Weeks, an American archaeologist, discovered a multiple corridored tomb of 62 chambers. They had stumbled upon a crypt fit for 50 princes - the sons of Rameses II - which had remained undisturbed for 2,000 years. It is known now as KV 5 - the greatest archaeological discovery for 75 years and the biggest and most complex tomb ever found in Egypt. Kent Weeks has written the book himself using his daily journals. The journal method heightens the drama; the author had no idea that he was on the verge of such a major find.