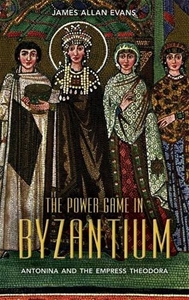 The Power Game in Byzantium: Antonina and the Empress Theodora

This title presents an original portrayal of Justinian's reign, its politics and theological disputes, focusing on the lives of two extraordinary women who wielded power and influence. A fascinating exploration of the corridors of power in Byzantium of the time of Justinian (527-565), the book reveals how Empress Theodora and Antonina, both alumnae of the theatre, were remarkable examples of social mobility, moving into positions of power and influence, becoming wives of key figures. Theodora had three aims: to protect those Christians who would not accept the Chalcedonian Creed; to advance the careers of her family and friends; and to defend the poor and assist the defenceless and, in particular, women - a mission which she claimed publicly. Finally, there was the allure of power, and though the exercise of power cannot be qualified as an 'aim', there can be no doubt that Theodora loved authority: she made and unmade marriage contracts, and appointed men to office, or destroyed them if they got in her way. Antonina was both friend and agent, and equally ruthless. She managed her husband, Belisarius, and advanced his career, though she was unfaithful to the marriage bed, and would outlive the main players of the age of Justinian.