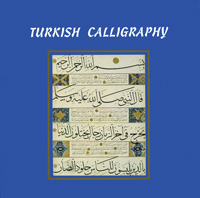 In Islamic sources the art of calligraphy is defined as "spiritual pattern formed by wordly tools". True to this definition, the art of calligraphy created with a reed pen and soot ink has continued its development through the centuries. In the system of Islamic calligraphy most letters change in form according to whether they are at the beginning, middle or end of the word. The fact that each letter can be written in many different forms created a wealth of variety and made it possible to develop endless patterns in writing. For Islamic calligraphy, pens made from the reeds growing in swamps on river banks and lakes are used. The raw reeds, after having being cut, mature in manure so that they lose their dampness and become hard. When dry, the reeds take on a brown or black colour, according to which kind of reed they are. The tips of these reeds are cut and sharpened with a knife on a bone or ivory pen rest called a makta , 2-3 cm. in width and 10-20 cm. in length. Then they are ready for use. However, for fine writing such as naskhi and for long texts like the Qur'an, the hard, black thin branches of a tree that grows in Java are used most often. The Java pen is made of the branches of this tropical tree because these are stronger and the points do not wear out easily.