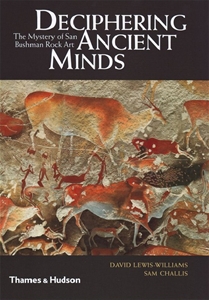 This intriguing book demonstrates that the ‘prehistoric’ mind was as complex and sophisticated as our own.
Researchers over the years have believed their modes of thought fundamentally different from ours. Along with the Aborigines of Australia, the San people of southern Africa – among the last hunter-gatherers on Earth – were viewed either as irrational fantasists or childlike, spiritual conservationists.
New research has overturned these misconceptions. Here, the great authority David Lewis-Williams and his colleague Sam Challis reveal how the rock paintings and engravings can be made to yield insights into San beliefs and ways of thought.
Comprehensive transcriptions, made in the nineteenth century, exist of interviews with San people who were shown copies of the art and gave their interpretations of them. Using these and the analogy of the Rosetta Stone with its parallel texts, the authors move between the rock art and the San texts, teasing out the subtle meanings behind them both. The picture that emerges is very different from past analysis: this art is not a naïve narrative of daily life but rather is imbued with power and religious depth.