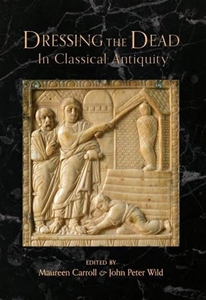 Dressing the Dead in Classical Antiquity

Naked we come into the world, but we are extraordinarily unlucky if naked we leave it. It is a human reaction to cover the dead with textiles. This volume presents the results of new and ground-breaking research in the UK and abroad on clothing and textiles in the context of death and burial in Classical Antiquity, from the fifth century BC to the fifth century AD. The geographical scope encompasses the Mediterranean, as well as the European, Asian, Egyptian and North African lands that were part of the Graeco-Roman world or that interacted with it in a variety of ways.Investigations of funerary rituals thus far have focused on grave markers, burial ritual, grave goods, and skeletal material, while the roles of clothing and textiles in these rituals are less well understood. The topic is explored by studying a variety of different types of evidence: textiles in graves, such as shrouds and coverlets or the clothing in which the dead were dressed; clothing and textiles associated with death rituals, such as mourning dress; funerary portraits in sculpture and painting that depict the deceased dressed to convey messages about identities; and jewellery and dress accessories worn in death and included in the grave. The papers presented here offer tantalising glimpses of the role of clothing, textiles and bodily adornment as social markers, ostentatious displays, and expressions of identities in Classical Antiquity.