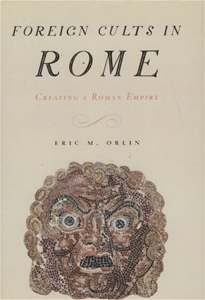 Religion is a particularly useful field within which to study Roman self-definition, for the Romans considered themselves to be the most religious of all peoples and ascribed their imperial success to their religiosity. This study builds on the observation that the Romans were remarkably open to outside influences to explore how installing foreign religious elements as part of their own religious system affected their notions of what it meant to be Roman. The inclusion of so many foreign elements posed difficulties for defining a sense of Romanness at the very moment when a territorial definition was becoming obsolete. Using models drawn from anthropology, this book demonstrates that Roman religious activity beginning in the middle Republic (early third century B.C.E.) contributed to redrawing the boundaries of Romanness. The methods by which the Romans absorbed cults and priests and their development of practices in regard to expiations and the celebration ofludiallowed them to recreate a clear sense of identity, one that could include the peoples they had conquered. While this identity faced further challenges during the civil wars of the Late Republic, the book suggests that Roman openness remained a vital part of their religious behavior during this time.Foreign Cults in Romeconcludes with a brief look at the reforms of the first emperor Augustus, whose activity can be understood in light of Republican activity, and whose actions laid the foundation for further adaptation under the Empire.