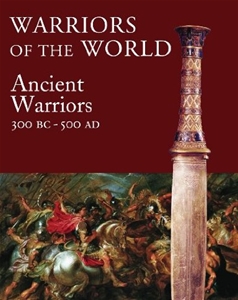 The first book in a new, lavishly illustrated series on the weapons, uniforms, and other key details that defined the world’s most legendary warriors.

Spanning some 3,500 years of history and moving from the Bronze Age to the Iron Age,Warriors of the Worlddescribes the armies that fought on the battlefields of the Classical World. The book shows how the composition of those armies changed as different cultures rose and fell from prominence—such as the peasant levies of the Egyptian Pharaohs, and the well-drilled citizen soldiers of the Roman Republic—and as tactics and technology advanced, allowing better armor and weapons to be used to greater effect in battle.

From the first organized armies of the Ancient Near East to the so-called “barbarian” hordes of Goths, Huns and other non-Romans who caused the fall of the Western Roman Empire,Warriors of the Worldexplores the development of ancient soldiers and how they fought through the ages. With detailed color illustrations and fact-filled accompanying text, the book is the essential guide for any enthusiast of the period.