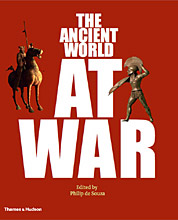 The Ancient World at War

A group of distinguished historians and archaeologists discuss major battles and wars not only from ancient Egypt, the Near East, Greece and Rome, but also from Central Asia, India, China, Korea, Japan and the Americas.The book ranges in time from 8000 BC in northern Iraq to the armies of the Aztecs and Incas half a millennium ago, and includes Alexander the Great's campaigns against Persia, Hannibal's conflict with Rome, Caesar's Gallic Wars, the Han Chinese defeat of the nomadic Xiongnu horsemen, and the Inca ruler Atahualpa's last stand against Pizarro.

The authors combine descriptions of military events with expert analyses and explanations of the underlying social, economic and cultural factors that shaped ancient warfare.

• The evolution of armies
• Tactics and military equipment
• Newly commissioned 3-D reconstructions
• Key battles such as Qadesh, Issus and Cannae
• Weaponry from shields to artillery
• Visual sources such as Trajan's Column and
the Terracotta Army