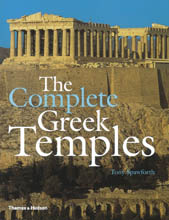 This is the first complete, fully illustrated survey of Greek temples ever compiled. Written by a leading authority and profusely illustrated with photographs, maps, plans and reconstruction drawings, it is both an inspiring survey for tourists and travellers and an essential work of reference for students and scholars.
Contents include:
• Homes of the Gods: Development, Glory and Decline
• Building for the Gods: Siting, Construction, Decoration
and Finance
• Encounters with the Gods: The Temple in its
Sacred Setting
• Temples of the Gods: Seven Journeys Through Greek Lands – a complete and up-to-date gazetteer of colonnaded Greek temples, including the famous temples of Athens and Olympia, as well as hundreds of lesser-known sites, along with the latest discoveries, all arranged by region.
Tony Spawforth, former Assistant Director of the British School at Athens, is Professor of Ancient History at Newcastle-
upon-Tyne University and Honorary Curator of the Shefton Museum of Greek Art there. He is co-editor of The Oxford Classical Dictionary, co-author ofGreece: An Oxford Archaeological Guide and a well-known presenter of programmes in the BBC television series 'Ancient Voices'.