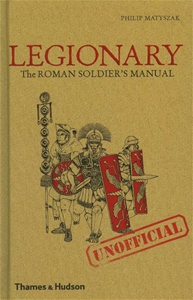 ‘A very interesting, original and well structured work for anyone who enjoys the Roman military themes … a fun and easy read ’ – Ancient Warfare

Rome stands supreme from the desert sands of Mesopotamia to the highlands of Caledonia. The empire rests on the sturdy shoulders of the legionaries who hold back the barbarian hordes, and continue to expand the frontiers ...

Combining the latest archaeological discoveries with modern-day reconstructions, this book – written by a leading expert, the author of Ancient Rome on Five Denarii a Day – provides a vivid and unforgettable picture of what it meant to be a Roman Legionary.

All the essential information needed to get in and get on in the Roman army...

How to be accepted into the legions and which legion is for you
What to wear – and what not to wear - while on campaign
Who’s Who in the Roman army, and how to tell a Berber from a Pict
How to wield a gladius and fire a catapult
How to storm a city and survive
How to act when Rome is honouring your legion with a triumph

Philip Matyszak has a doctorate in Roman history from St John’s College, Oxford, and is the author of Chronicle of the Roman Republic, The Enemies of Rome, The Sons of Caesar, Ancient Rome on Five Denarii a Day and Ancient Athens on Five Drachmas a Day. He teaches an e-learning course in Ancient History for the Institute of Continuing Education at Cambridge University. SeePhilip Matyszak's website.