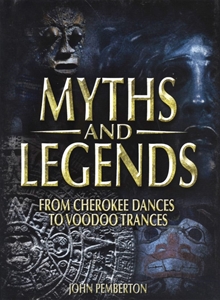 Myths and Legends: From Cherokee Dances to Voodoo Trances

The impulse to create myths is inherent in all of the world's cultures, and the similarities in theme between these tales reveal some basic truths about mankind. Profusely illustrated with photographs and period art, this truly worldwide anthology provides an overiew of the Greek, Roman, and Norse myths, but also delves into the sacred stories of the Americas, as well as Celtic Britain, Africa, the Middle East, China, and the South Pacific. Here are such heroes as Hercules, Thor, King Arthur, Robin Hood, and Gilgamesh, as well as such fearsome creatures as Sasquatch, the Sphinx, and the Loch Ness Monster. Also included here are compelling creation myths from Egyptian, Japanese, Polynesian, and Aboriginal cultures.