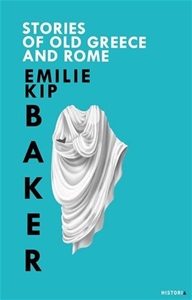 Stories Of Old Greece And Rome

In the days of long, long ago when men built altars, and burned sacrifices, and worshiped their gods in temples of pure white marble, Jupiter, the greatest of the gods, sat upon his throne on high Olympus and looked down upon the doings of men. The topmost peak of Mount Olympus was covered with clouds,—so high it was above all the hills of Greece,—and its slopes were thickly wooded. Just how high the mountain really was could only be guessed, for no man had dared to climb even as high as the first cloud line; though the story goes that once upon a time a wandering shepherd, looking for a strayed lamb, had ventured far up the mountain side and had soon lost his way.

He groped about blindly, as the mists began to thicken all around him, and the sound of his own footsteps terrified him in the dreadful silence that seemed to2 be suddenly creeping over him. Then a mighty tempest broke over his head, and the mountain shook to its very base. From the hand of wrathful Jupiter fierce thunderbolts were hurled, while the lightning flashed and gleamed through the darkness of the forest, searching out the guilty mortal who had dared to climb too high.