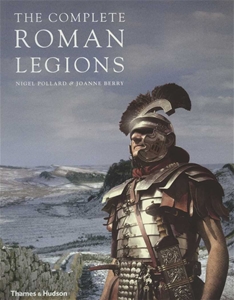 New in paperback, the first book for a general audience to cover all forty-five imperial legions in compelling detail

‘Beautifully designed and comprehensively illustrated, the book’s authoritative and informative text dramatically brings to life the ancient world’s most successful military machine’ – Professor Lawrence Keppie, author of The Making of the Roman Army: From Republic to Empire

‘This book is a pleasure to read from cover to cover. It is written in a clear, precise style, illustrated copiously in colour and well laid out. It would be a worthwhile addition to any bookshelf’– Minerva

‘Highly informative … a wonderful introduction because the prose is clear, and the maps and illustrations are informative and good reminders of the wealth and power that was Rome’– Contemporary Review

The legions of Rome were among the greatest fighting forces in history. For almost half a millennium they secured the known world under the power of the Caesars. This pioneering account gathers together the stories of each and every imperial legion, telling the tales of their triumphs and defeats as they policed the empire and enlarged its borders.

Focusing on the legions as the core of the Roman army, and chronicling their individual histories in detail, the book builds on the thematic account of the Roman military force given by its companion The Complete Roman Army, and is vital reading.

Nigel Pollard and Joanne Berry are both lecturers in Ancient History in the School of Arts and Humanities at Swansea University. Joanne Berry is the author of The Complete Pompeii and, with Philip Matyszak, Lives of the Romans, both published by Thames & Hudson.