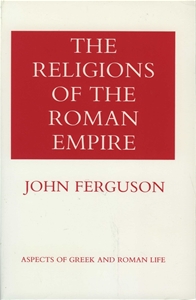 The Religions of the Roman Empire

"Fergus has given us here a remarkably full and variegated picture of religious life in the Roman Empire, especially during the second and third centuries. Certain features make the book particularly attractive. First, Ferguson draws his data largely from the field of archaeology, which not only gives its own special authenticity to the account, but, with numerous plates inserted for illustration, provides a constant visual image for the reader. Second, the book carries an unusual weight of solid factual information, all neatly disposed into lucid categories. Third, Ferguson conscientiously surveys the whole of the Empire: from Britain, the Danube, North Africa, Asia Minor, wherever Roman culture touched, the evidence is recorded. And fourth, the book covers every conceivable aspect of religion, from amulets to philosophers."

"This well-illustrated and scholarly book is a pleasure to read. The style is vigorous and concise, enabling a vast amount of information to be packed into a short space. The pen portraits of Marcus Aurelius or Epictetus are masterly, and so too are the brief accounts of the philosophies of the Stoic and Platonic schools. The light and shade of the Antonine era is vividly portrayed, the quacks and shamans and the practitioners of black magic rubbing shoulders with poets, philosophers, and emperors. All play their part in completing a vital picture of the Indian summer of the ancient world."